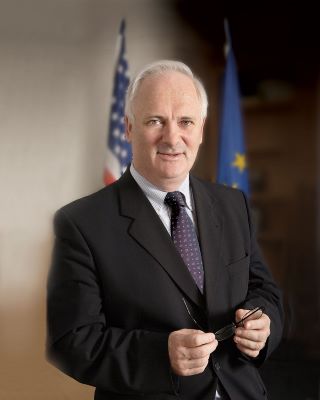 John Bruton is a former Irish Prime Minister (Taoiseach), who helped transform the Irish economy into one of the fastest growing economies in the world. John Bruton was also deeply involved in the Northern Irish Peace Process leading to the 1998 Good Friday Agreement. John Bruton was first elected to the Irish Parliament in 1969 at the age of 22 as a member of the Fine Gael Party. He has served as Ireland’s Minister for Finance (1981-1982 and 1986-1987), Minister for Industry & Energy (1982-1983); Minister for Trade, Commerce & Tourism (1983-1986); and was Parliamentary Secretary (Junior Minister) from 1973-1977.

In 1990 Bruton became Party Leader of the Fine Gael Party and led it into government in 1994.

In 1996, when Ireland held the EU Presidency, Prime Minister Bruton helped finalize the Stability and Growth Pact which governs the management of the Euro. He also helped draft the European Constitution, signed in Rome on October 29, 2004. In 2004 he was appointed as EU Commission Head of Delegation in the United States for a five-year term until October 2009.

He was Chairman of IFSC, a private-sector body set up to develop the financial services industry in Ireland from 2010 to 2015.

Currently, he is a member of the boards of Ingersoll Rand, the Irish Diaspora Loan Origination Fund, PIMCO Ireland based funds, the Irish Institute for International and European Affairs, and the Centre for European Policy Studies. He is chairman of the Public Interest Oversight Body of Deloitte in Ireland. Additionally, he acts as an advisor to Fair Observer, focusing mainly on the areas of politics, finance, and economics, as well as on issues pertaining to Europe.